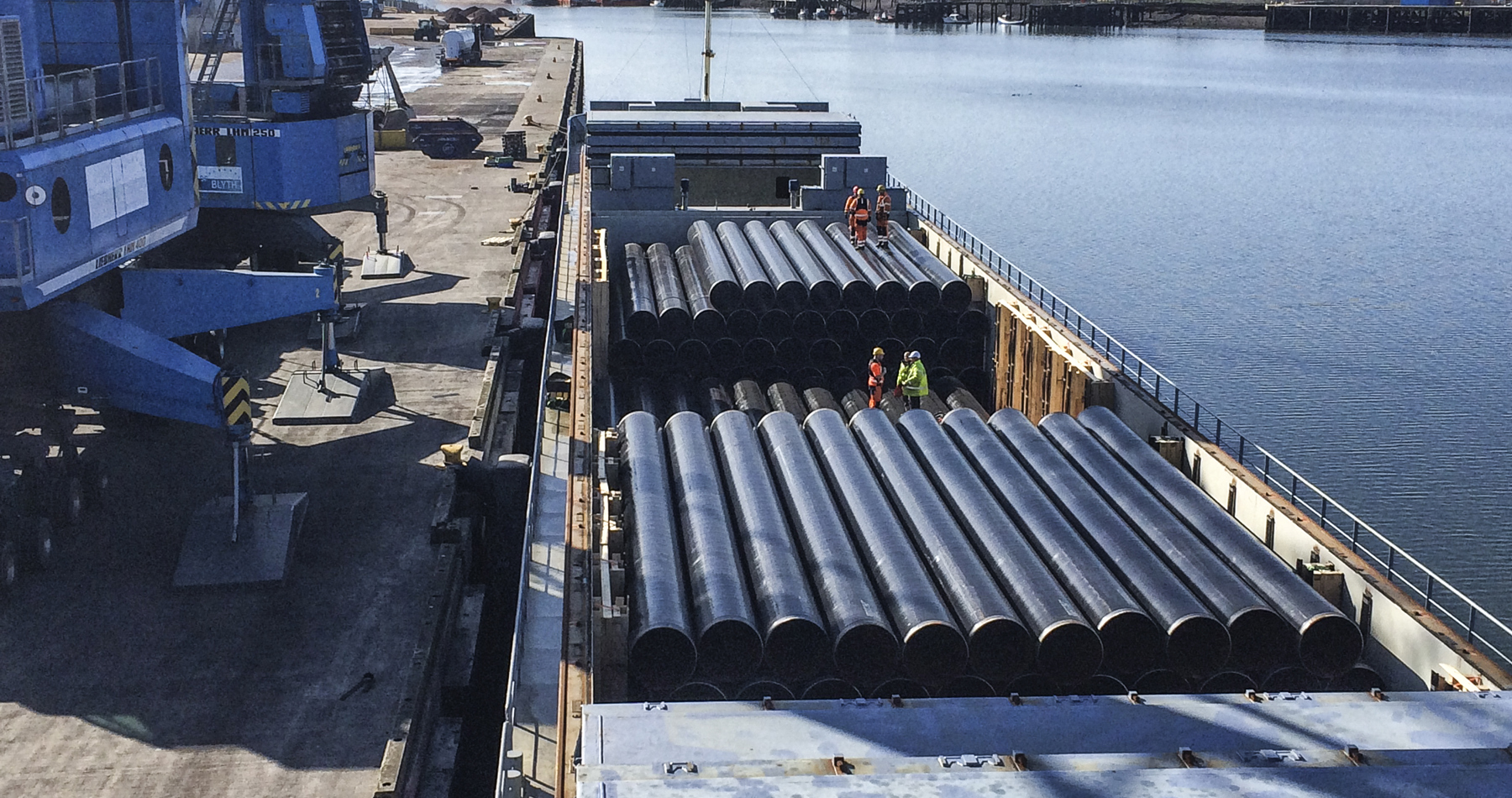 Piping logistics at their very besy

Wagenborg has been cooperating with Transchart to transport gas piping around Europe. At the moment, this “occasional” joint venture is again going full steam ahead for a project near the Scottish town of Dumfries. Implementation of the project is being supervised for Wagenborg by Max Tack and Thijs van der Wenden. Thijs is going to tell us a bit about the project.

There’s a lot of furious work going on at the harbour in Blyth (northeast England), with trucks driving back and forth and harbour cranes unloading pipes from the MV Altena, and there are huge rows of pipes ready to be taken to their final destination. Thijs van der Wenden is supervising onsite operations. “These gas pipes are bound for the Dumfries project,” he explains. “Our job is to deliver a total of about 4.000 pipes to the dump sites at Cargenbridge and Twynholm. We’re using 18 trucks and 24 trailers.” He points to the ship that’s being unloaded alongside the quay. “The loads for the trucks are being brought in by the MV Altena, which is part of  our own fleet. She arrived here for the first time this morning from Bremen, fully laden with the first cargo of  gas pipes. Each truck can carry precisely five pipes, so it will take quite a few trips to get them all across to the temporary storage areas.”

The spider at the centre of the web

It takes only a week to get a gas pipe to its final destination, including loading at Bremen, transport across the North Sea, road transport across northern England into Scotland, and unloading at one of the dump sites. That’s fast, and it’s only possible because of optimal collaboration and excellent coordination between all the parties involved.

“Wagenborg Projects & Logistics is like the spider at the centre of the web,” says Thijs van der Wenden. “We act as the main contact for the client and we than direct our subcontractors, in this case Wagenborg Shipping, the port authority, and stevedoring by the Port of Blyth, the local transporter MDF transport, and the Van den Maagdenberg crane company, which is responsible for unloading and stacking of the pipes on site. Before the  project got started, we organised a meeting with the various parties to discuss how it could be implemented in the most efficient manner. Every party contributed its own special expertise. On that basis, we produced a transport management plan, which specifies the action plan and the roles and responsibilities of all the parties involved.”

Thijs has now been joined by the captain of the MV Altena. “Both holds are now empty,” he reports, “so we’re
going right back to Bremen for the next load of pipes. Over the next few weeks, the Altena will be doing seven trips to get all the pipes across to Blyth.”

Hatches removed from the holds

Each truck can handle five pipes

Mooring at the quay side in Blyth

Port crane in position for unloading

After securing the load, the truck will head for the temporary storage area

Best of both worlds

The gas pipes are being transported to Dumfries by the “occasional” joint venture consisting of Wagenborg and Transchart. Collaboration between these two firms goes back many years. Efthi Krause, Transchart’s managing director, fills in the background: “The collaboration between us and Wagenborg is a matter of combining specialisations. Wagenborg is a specialist in door-to-door logistics, which Transchart has specialist expertise in the gas piping sector. That combination has already proved successful on several occasions, including for the construction of the OPAL and NEL pipelines.”

Mr Krause continues: “Transchart considers the collaboration with Wagenborg to be excellent. We’ve had a lot of experience with various logistics firms, but the great thing about Wagenborg is that they’re more than just a shipping company. They’re really excellent at dealing with the pre- and post transport sides of things. We’ve now decided to continue perfecting our collaboration so that we can continue to offer this total logistical package. It’ll enable clients to save money. And if we can offer this kind of service on land, why not also at sea, as in the case of this Dumfries project? It means we’ll remain competitive in a growing market.”

Pride and ambition for the future

Although Wagenborg’s home base is at Delfzijl in the Netherlands, it has shown for many years that it can provide its services far beyond the country’s borders. In recent years, the company has carried out a number of piping projects. Wagenborg transported tens of thousands of pipes for the large scale OPAL, NEL, NorgroN, and Dumfries pipelines. And in view of the current market trends, that’s certainly not going to be any less in the future. “If you ask me,” says Thijs van der Wenden, “the secret of our success is the commitment of our people. Their expertise is undeniable. So we’re certain that the result will be a faultless project without delays or any significant damage. And that makes me proud!”

From Leith to Varna

Besides the Dumfries piping project is Wagenborg making 14 voyages with her A-class vessels from Leith in Scotland to Varna in Bulgaria with gas pipes.