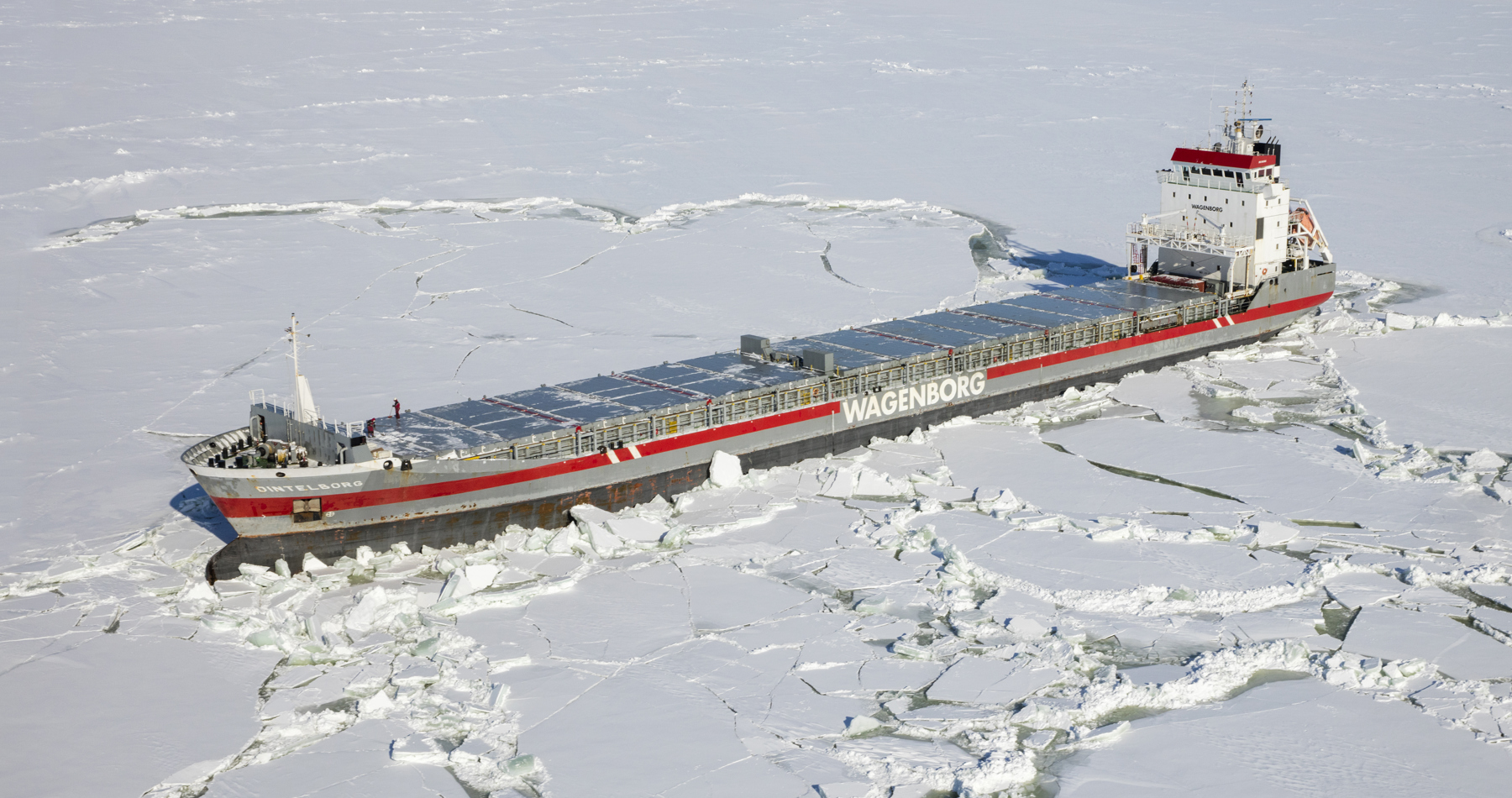 Wagenborg is a company that has literally broken the ice in the harshest and desolate environments in the world. Its early operations mainly involved the timber and salt trade to the Baltic, but today Wagenborg sails the seven seas. Even so, the majority of its fleet movements can be traced back to the Baltic, the St. Lawrence Seaway, the Great Lakes, and Arctic waters. Why is that? Despite global warming, those areas are still characterised by harsh winter conditions, and it’s in those conditions that Wagenborg’s largely ice-reinforced fleet operates extremely well. That may sound pretty simple, but in practice, things are rather different.

Navigating in ice is quite dangerous and vessels that travel in arctic regions must therefore be specially equipped and be assigned to an ice class. The great majority of Wagenborg’s ships are constructed to an ice class, with 80% even holding the Finnish/Swedish “1A” class. But what does that actually mean? Under the Finnish/Swedish rules, an ice class is allocated to a vessel if its construction means that it’s technically capable of navigating through fresh (i.e. first-year) ice in the Baltic when calling at Finnish or Swedish ports. There are six different ice classes, depending on a vessel’s hull shape, engine power, and ice performance according to specific rules. During winter months, restrictions apply to navigation based on these ice classes.

Besides their ship being ice-reinforced, it’s perhaps even more important that the crew know what they are doing. That is emphasised by the Polar Code of the International Maritime Organization (IMO). The Polar Code is intended to cover the full range of maritime issues relevant to navigation in Arctic waters. Training and operational matters for crew members are important elements of these mandatory regulations. The intention is to protect the environment and ecosystems of polar regions and Arctic waters.

Last year, Wagenborg’s vessels carried out a total of more than 5500 journeys. Approximately half of them had the Baltic as their origin or final destination, so that region still remains one of the company’s main focus areas. Wagenborg vessels are therefore frequently to be seen in the many northern Swedish and Finnish ports in the Gulf of Bothnia, such as Gävle, Sundsvall, Pitea, Lulea, Tornio, Kemi, Oulu, Raahe, Kokkola, Vaasa, and Pori. Many of Wagenborg’s captains have years of experience of navigating in ice. What has that practical experience taught them?

“We’ve just got back from a trip that started in the north of the Gulf of Bothnia, unloading and then reloading in Tornio, Oulu and Kaskinen, which are all in Finland. I’d been there before, but this time it was seriously cold and therefore there was full ice cover.

Navigating in ice is pretty special. You constantly feel vibrations, especially when the ice gets thicker and the speed of the ship decreases. We usually have to use maximum engine power in order to keep moving. If you lose momentum in heavy ice, then you quite quickly come to a standstill and then you’ll almost certainly have to wait for an icebreaker to come and assist you.

So the most difficult thing about ice navigation is keeping moving all the time. It’s therefore important to follow the tracks left by other vessels. At night, you can’t do without effective searchlights. To make things easier in winter, the local authorities have designated special ice paths that form a route. All ships follow these paths and are escorted by icebreakers. Where the ice is thickest, the icebreakers take the lead, with the weakest vessels following immediately behind and the stronger ones following in convoy.

What’s also very difficult in ice is turning. If you’re travelling in thick ice, you can turn the wheel as much as you like but the ship won’t change direction at all. Whenever you change course, you have to do so very gradually with a huge turning circle.

I’m proud to be able to report that the Wagenborg fleet has an excellent reputation with pilots and authorities when it comes to ice navigation by our powerful and well-manoeuvring vessels."

“I do two or three trips a year through the ice in the northern Baltic. The first thing to say is that they are tough journeys. There are constant risks, not only to the ship but also to all those on board. As the captain, you have to be constantly aware of that. The most difficult thing about navigating in ice is that you don’t really have time to relax. You have to be constantly on watch and alert to your surroundings. What’s more, you also hear and feel the ice breaking day and night. And it’s not only the crew who are subject to stress; the ship’s machinery and main engine are also exposed to additional loads. The risk of ice damage is
present all the time. My experience is with D-type and H type Wagenborg vessels, both of which are types that perform extremely well in ice.”

“Navigating in ice can be difficult and dangerous. You can’t even always rely on the buoys because ice formation can move them around and they can even disappear under the ice. The ice can be seriously thick, and the total thickness under water is as much as three to four times the height of the ice above the waterline. And the older the ice, the harder and stronger it becomes. You have to avoid contact with old ice at all times. It’s easy to underestimate the thickness of the ice. I follow a number of general rules. For example, I never go through ice if there’s an alternative open route, even if it’s somewhat longer. And if I have to enter  the ice anyway, I reduce speed so as to easily absorb the initial impact. Once I’m in the ice, I increase speed so as to maintain momentum but not damage the ship. You have to pay special attention to weak or open areas in the ice, where your speed can increase unnoticed if you don’t reduce power. But you can make use of those places to turn or to change course easily; there’s no use trying to do that in the midst of thick ice! ”

“The good thing about navigating in ice is that there are fewer ship movements, such as pitching and rolling. There’s also less icing of the ship itself, which you get when it’s cold and high winds spray seawater onto the superstructure. In extreme cases, the ice can then build up to such an extent that the ship becomes top-heavy and may even capsize.

For me personally, the biggest challenge is following a route through the ice in darkness and/or heavy snow showers. The most dangerous thing is following an icebreaker in heavy ice when the distance between my ship and the icebreaker is only very short. There’s a risk that the icebreaker may get stuck in the ice and if you then react too late your ship may run into it. So you have to be extremely cautious and always prepared for such dangers, anytime, anywhere. Good communication is essential.

My own experience is with F-, D-, V-, and M-type Wagenborg vessels, which are relatively long and narrow. That means they behave rather like a needle when you pass through the ice, which for me is their biggest advantage. One Canadian ice pilot was surprised at how we were able to pass through such thick ice without the aid of icebreakers.

I think that Wagenborg’s clients have a definite advantage with these ice-class vessels, because Wagenborg can ship their cargo to a frozen-up port when others can’t reach it."