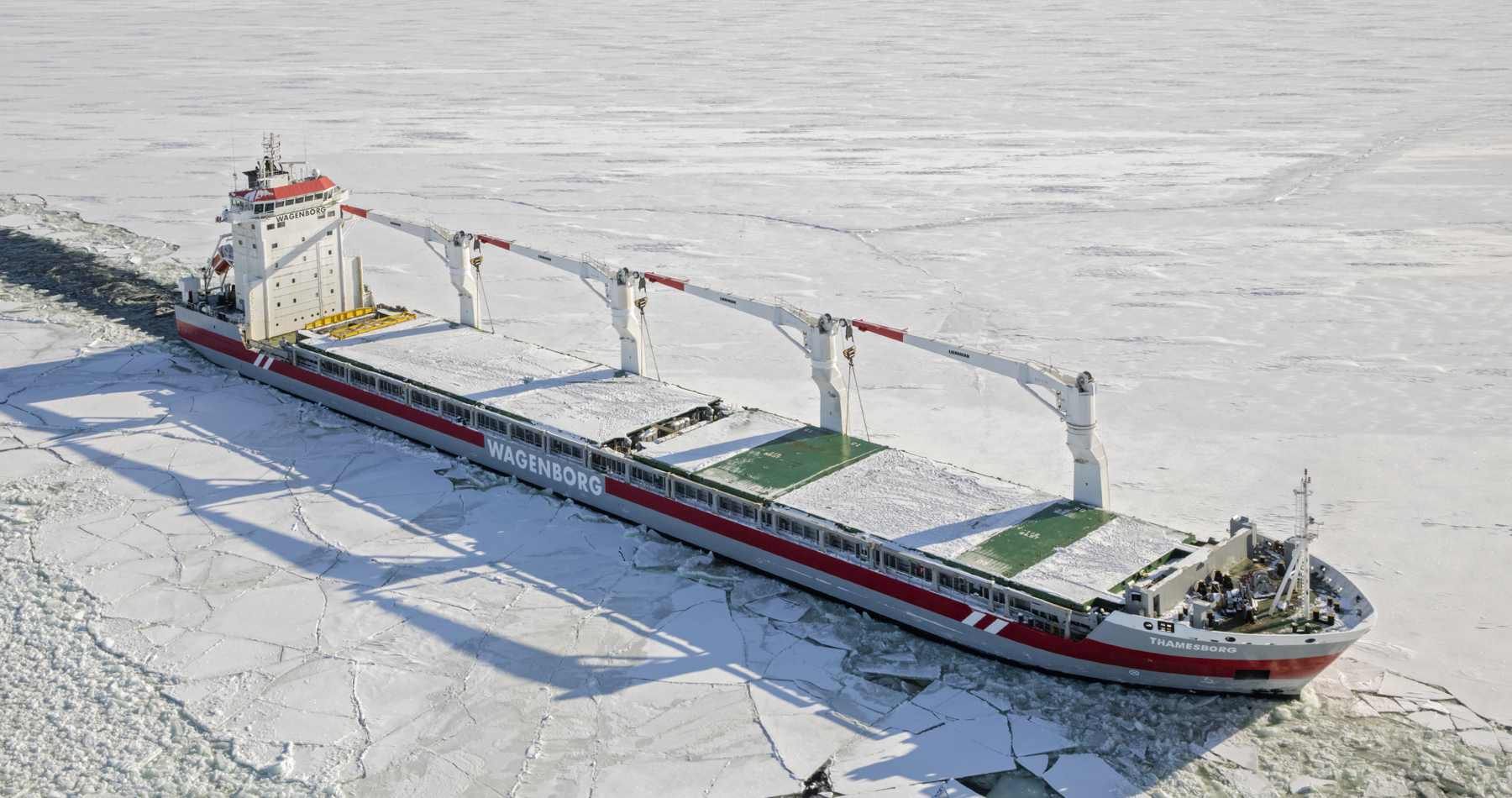 Wagenborg is increasingly knocking on the door of the North Pole

Climate change makes the waters above Canada and Russia navigable and the exploitation of minerals becomes profitable. The Arctic is a top economic priority for the arctic countries. As the trade is growing around these areas, also shipping activity is increasing. The North Pole region is becoming a playground for Wagenborg, see chartering directors Hans Kroon and Marco Renzelli who are involved in deep sea shipping at Wagenborg.

On 19 September 2016, the MPP vessel Amazoneborg completed the journey between Canada and China along Canada’s northern coast. Marco Renzelli tells: “It was the first time a Wagenborg ship had traversed these waters without icebreakers, and it did so in record time: 19 days, 30% faster than the traditional route through the Panama Canal. This voyage was absolutely a new milestone for Wagenborg. It won’t surprise me if this marked the beginning of a shift of our trading routes towards the north.” In the years that followed Wagenborg repeatedly sailed various arctic shipping routes. Hans adds: “This year we again had a premiere by completing the Northern Sea Route, twice.”

The new routes of the Arctic

It is important to note the different types of ship travel in Arctic waters. Firstly, there is intra-Arctic traffic, which Russian companies have a monopoly on, transporting goods from the mines in Siberia to ports in the region, including Murmansk and Dudinka. A second type are the routes to places in the Arctic for tourism, science or in search of petroleum reservoirs. But it is the third type of Arctic sailing that could redefine international trade routes, as it involves journeys traversing these waters en route to other leading ports on the global sea traffic scene.

"It won’t surprise me if this marked the beginning of a shift of our trading routes towards the north."

We expect of the two routes, the Northern Sea Route will be more interesting, as it will be fully navigable within 10 to 15 years. It will also give Russia more navigable coastline than any other country in the world.

The route through northern Alaska and Canada, however, will be blocked by ice for much longer and involves other difficulties. Researchers at the think-tank The Arctic Institute don’t believe it will be viable because the waters won’t be freed of ice as quickly as the Russian route (where Siberian rivers make the coastal waters more temperate) and there are numerous islands that allow ice to form more easily on the Northern Sea Route. Plus, this route doesn’t have any ports that are deep enough for large vessels.

If we analyze shipping traffic in the Arctic, there are two main routes: the Northwest Passage (NWP) and the Northern Sea Route (NSR).

The NWP is an old dream, when explorers from the 18th and 19th centuries. They searched for a passage between the Atlantic and Pacific Ocean along northern Canada. The NSR, which mainly traverses Russian waters, is historically less interesting, but will be the first to be ice-free due to climate conditions.

"We think it is important to invest in discovering these sailing areas as this might give us a competitive advantage in the market."

One of the noteworthy strengths of both routes is the shorter distance between Asian and European ports. For example, the journey from China to Canada through the Northwest Passage is about 4.000 nautical miles shorter than the traditional route via the Panama Canal. This reduction in the distances would translate into shorter voyage time. Also this shorter journey results in less CO2 and other emissions per shipped ton cargo. Complemented by sailing at relatively slow speed, the reduction in emissions is over 40%. Hans explains: “We are aware that the Arctic is an environmentally sensitive area and we therefore feel responsible for its natural features and its inhabitants. That’s why we do everything possible to prevent risks to the environment. Wagenborg complies with all rules and regulations as mentioned in the Polar Code, and are maintained according our high standards.”

But beyond travelling a shorter distance and saving time, it is also important to take into account certain other factors that, today, are a burden on the profitability of the Arctic routes. Hans explains: “Climate conditions in this area can be very hostile for ships and the goods they transport (very low temperatures, very strong winds e.g.), which makes travel insurance more expensive and requires ships to be made of more expensive materials so they won’t suffer the effects of these low temperatures. The increased cost of a transarctic sea journey could make it less attractive from an economic standpoint. But we think it is important to invest in discovering these sailing areas as this might give us a competitive advantage in the market.”

Numerous climate models are available, but there are no doubts: the sailing routes in the Arctic will increasingly be navigable for an ever-longer period, and ultimately throughout the year. Increasing global and Arctic temperatures will continue to open Arctic routes more frequently and increase the Arctic shipping season length.